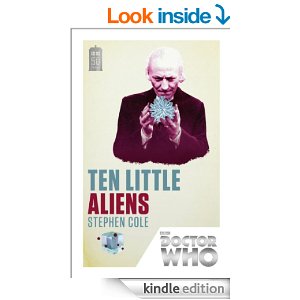 I decided to cheat a little an post an excerpt from the authors introduction, firstly it makes a few things easier to explain but also it will help you make sense of my review.

As you can see the Agatha Christie theme runs through this book not only in terms of a plot outline but also in the chapter titles each of which is an actual book title by Christie.

We start the book off from the point of view of the military unit, predominantly that of Shade initially with more characters becoming known to us as the book progresses.  They are in the middle of a war an believe they are about to take part in a training mission on an asteroid.  On their arrival they soon discover not all is as they expect it to be and they are not alone.

After a misdirected effort to reach their destination the Doctor, Polly and Ben also find themselves on the asteroid and a force field prevents the re-entering the TARDIS.

I am going to really leave the plot there as I don’t want to give away too much, those who know the Christie original will know people disappear one by one but in this case even that is not what it appears to be.

I have to confess that I am not thrilled by the companion choice for this book, of all the companions down the years these are two of the ones that I have least affection for and really cannot relate to.

My problem is they are very much of their time, the Doctor picks them up from Earth in the 1960’s and mentally they do not really change that much, for my personal taste Ben is far too patronising he references to Polly as ‘Duchess’ annoy me maybe because I used to have a dog by that name and can see similarities between the way he treats her and a pampered pooch.  Polly herself is also everything that frustrates me in many female characters, constantly requiring saving, insipid and superficial I just never feel any real depth to her character and her doe eyes at Ben make me feel a little queasy.

Sadly the Doctor himself is rather a non entity in this book, for the majority of the story he remains helpless on the periphery and only in the very last chapters does he real contribute to the story at all.

I know it sounds like I didn’t like the book very much but that is not really true, I liked the idea of it, and I like the story surrounding the space marines and the war they are fighting, but it very much felt like that was the main story and the Doctor was just squeezed in, I think the book could have been written just as well if not better without his presence at all.

If this had been a later, more physically active Doctor and more interesting companions it could have been a different story but I actually think as a first Doctor story it does not really work.

I am going to give it 4 out of 5 which may seem generous but the actual writing is good and the story is good just the Who link that fails in my eyes.