I put my hands up I opened the outer packaging and was disappointed to see the pale pink box before identical to the one I received in October, but to be fair it never said anything about different actual boxes each month I just assumed it as my first two were so different, but once I opened it up I was happy, I was expecting more make up in it approaching the festive season but actually the skin care stuff is more practical for me so here we go this was what I found upon opening the box… 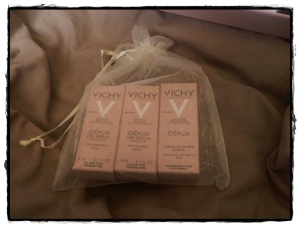 This set of three came in a lovely organza bag and contained two serums, and one illuminating lotion.  They had a slight floral smell and I decided to be fair and give them a couple of days before judging them, they are designed to be used on their own or under moisturiser and although they were adequate I prefered the Smoothie Serum I received previously and the other primer as an illuminating cream.  They were great on the normal areas of my skin but did nothing to hydrate my dry patches.  I received three 3ml tubes which have lasted fairly well but the full size 30ml bottle would cost £29.50 and I don’t think for me personally this would be a good investment. 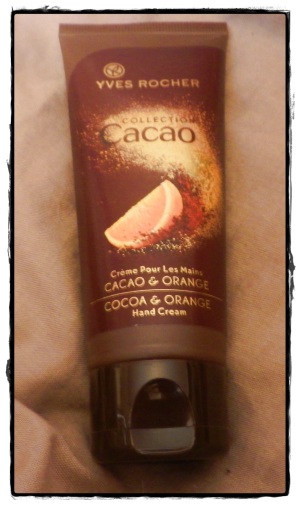 Well you would think there is not much you could say about a hand cream, it rubs in nicely and does leave your hands feeling really good, the only real issue I have with this is the smell.  The orange/chocolate combination is a rather pungent one and leaves your hands smelling like a Terry’s Chocolate Orange which is not a completely bad thing, however the smell does linger quite a while and if you are rather peckish it will drive you round the bend.  It is also off putting if you are eating something which does not go well with that fragrance.  I received the full size 75ml which costs £1.95 so it is very in expensive and if you can cope with the smell it is worth it.

Okay onto the next one…

I was very sceptical of this product having tried one of these sprays years ago and finding it failed miserably but I was pleasantly surprised.  While I would still recommend patience and allowing the base coat to dry naturally I did use it on the top coat and found it worked in some cases and not in others.  What seems to make the difference is not the spray but the quality of the nail varnish, when used with a more expensive, better varnish it worked perfectly but when used with a cheap bargain basement varnish it made no difference at all. At £3 for the 125ml spray it is cheap enough to give it a go but I would say don’t try it with a new varnish for the first time when you are in a rush always try it out when you have time for it to mess up.

This was another product I felt required a few days trial before commenting so I used it for three days before writing this and I have to say again I feel the serum did the same job but better.  To start with this is a strange one to apply as it requires you rub it onto a damp face, this means for the first few minutes your face feels like you want to grab a towel and dry it but if you can resist it does feel very nice afterwards.  It was not greasy as I had expected and did leave my skin glowing however I did not feel this really lasted the full day only a few hours. with the sample I got there is no amount visible but a 15ml bottle costs £29.50 however I have to say one drop twice a day does mean this will last a long time, I would probably not buy this and buy the Smoothie Serum from last month instead but if I were given a bottle I would happily use it.

Although I have not actually had the chance to try this out properly yet I am very impressed with it initially.  The packaging looks sleek and the test patch I tried with my finger was promising.  A full sized shadow worth £16.80 for 1.48 grams was sent and it is far more than I would normally pay for an eyeshadow palette let alone a single colour.  Hopefully I will get chance before this goes live to add some extra pictures with me trying it out.

Can’t wait to see what next months box will bring in the Christmas run up.

Eye shadow pictures, apologies the lighting in my bedroom was not very good when I took these but you can see what great dramatic effects you can create with the black eyeshadow. 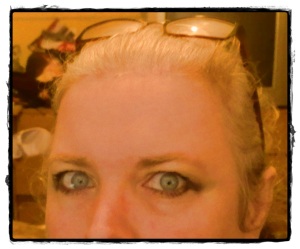