I am really lucky to have some fabulously talented friends, I had very specific ideas for the covers of my Queen Of Ages Trilogy and I had made a decision that I wanted something different to the normal computer manipulated images that grace the covers of most books these days, I love the copies of Tolkien I have with hand illustrated plates and maps and also the covers of the Terry Brooks books I possess so I ambushed a dear friend and talked over my ideas with her.

Stage one was persuade her to take on the project, thankfully she was excited as this was her first foray into cover design.

So let me introduce you to Debra Arnott, a woman of many talents.

Stage two was the creation of the three idea boards for the individual book covers, thankfully Debra completely understood where I was coming from with the random pictures, scribbles and poorly explained half ideas. She took the patchwork of ideas and skilfully merged them together to create a fantastic piece of art for me. A couple of tweaks were needed along the way including discussion of one or two elements that would be digitally enhanced but the result is amazing and something I look forward to hanging on my wall as soon as I get a frame. if you would like to see more of her amazing art work you can check out her page DA Creations here or my personal favourites are her paintings on wood which you can find on her page Wood Winked Art On Wood here.

Stage three was photographing the art work and adding the text, a process which was very hit and miss and was again inspired by the fantasy novels in my bookshelves. So without further ado I would like to share the cover art with you first the kindle version, second the print version (minus the blurb at the minute and finally the actual original painting so you can see you how wonderful it is minus the text. 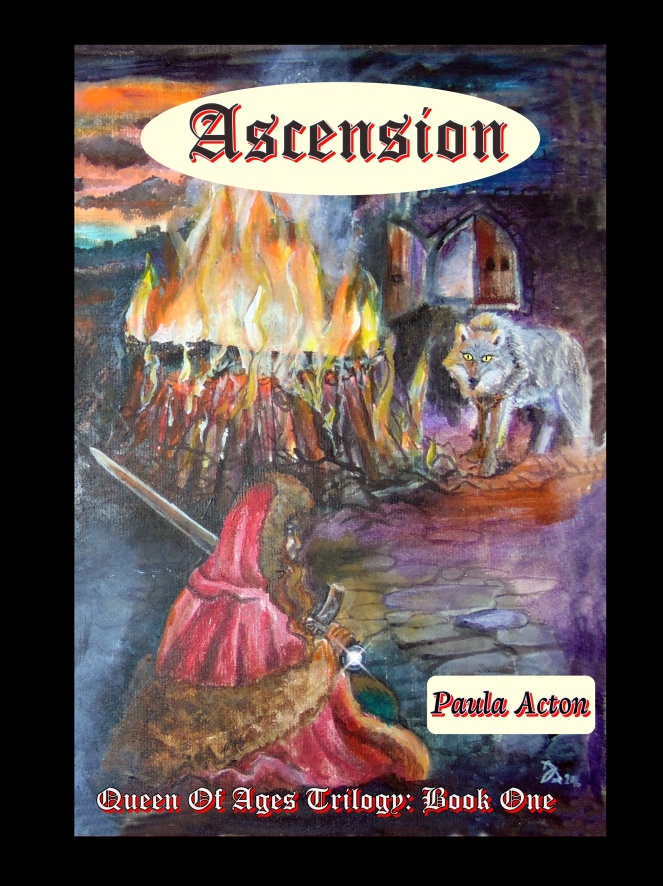 is for  Amigoni, Jacopo (1682–1752), also known as Giacomo Amiconi,  he was born in Naples or Venice in the late-Baroque or Rococo period. He is thought to have begun his career in Venice, but is known to have been well travelled and was prolific throughout Europe, where his portraits were in demand.

Amigoni initially painted both mythological and religious scenes before becoming sought after to decorate the homes of the wealthy. In 1717, he is documented as working in Bavaria in the Castle of Nymphenburg (1719), and yes part of the reason I picted him was because I love that name lol. then in  in the castle of Schleissheim (1725–1729); and in the Benedictine abbey of Ottobeuren. He returned to Venice in 1726. His Arraignment of Paris hangs in the Villa Pisani at Stra. From 1730 to 1739 he worked in England, in Pown House, Moor Park Wolterton Hall and in the Theatre of Covent Garden. I love the fact that he painted in such diverse places from theatres to monasteries in a time where you would have though that doing one would exclude you from another.

In 1739 he returned to Italy, perhaps to Naples and surely to Montecassino, in whose Abbey existed two canvases (destroyed during World War II). Until 1747, he travelled to Venice to paint for Sigismund Streit, for the Casa Savoia and other buildings of the city. In 1747 he left Italy and established himself in Madrid. There he became court painter to Ferdinand VI of Spain and director of the Royal Academy of Saint Fernando. He died in Madrid.

This painting is entitled Juno Receiving the Head of Argos (1730-32) and I have a couple of reasons for picking it first I love the fact it is mythical rather than religious but also having seen this type of work in real life you know that it will be a substantial piece and a photo will never do it justice.

I also love peacocks which of course are depicted here as a sign of the wealth and extravagance of the patron for whom this painting was commissioned. I love the fact there was no question of body shaming that having saggy boobs and love handles was totally okay, although I will say the cherub on the floor looking up does look a little creepy, like an old mans face on a babies body.

I could discuss more the technical aspects, there are issues with this painting in terms of multiple light sources and a couple of anatomical abnormalities but the fact is sometimes you just have to over look the details to enjoy the big picture something that in today’s society has become increasingly difficult for a lot of people as everything is placed under a microscope and scrutinised.

One thing I am going to do with each painting I feature is consider what type of book would it fit on the cover of, I think this would be a story of revenge and betrayal, the scorned woman receiving the head of her murdered lover for whom she feels nothing but contempt, in the story the messenger would be the new lover who has acted on her wishes but of course she would in turn betray him and it would be a he said/she said case for justice to determine the true criminal before they are both condemned, she going to her fate with a hard heart him heartbroken still at her abandonment of him.

I decided that as generally I don’y get much time on a Saturday to keep it simple.  I have noticed a few people out there do a weekly round up as well as set a few goals for the upcoming week so in an attempt as some form of organisation I thought I would give it a go.

So as this is my first weekly post and I hadn’t really set any targets this week I can honestly say I met them all hehehe.  That isn’t to say it hasnt been a productive week I have added 10,000 on my novel word count around 8.000 of whic I am happy with the rest will get fixed in the edit…I hope.

I have revamped my blog page I liked the other but the red background was proving problematic in using muliple colours in interviews so a change was needed.  I also decided despite the fact I LOVE getting awards and all the other widgets it was getting a little crowded so now the awards have their own special page and once I get them all up there you can go to the post for each blog by clicking on the link.  Please let me know what you think to the new blog theme i am not normally a pink person but I think as an antidote to they grey skies here it works quite well.

I am blogging quite late tonight as the other half is out normally Saturday after I get out of work is family time but tonight he is out for a couple of hours at a workmates birthday do so I get to spend extra time with you…you lucky people lol   Actually he tried out a new hairdressers today usually I decided to go wait while he got his hair cut instead of mooching round the supermarket huge mistake.  Not only did I probably embarass him ever so slightly by asking the stylist if she could transform him in to Brad Pitt and numerous other comments but I ended up window shopping.  This is another slight quirk of mine I love oil paintings although I only own three at the minute as we dont have much space to hang them but in the hairdressers several acrylics on canvas were hung on the walls.  At first I just thought they were decoration then I spotted it a price tag hanging down from one.  As the other half paid for his new do (quite sexy actually but don’t tell him I said so) I slyly took a closer look and guess what pay day next week I think one may be finding a new home.  The teenager is moving out in September and then we are redecorating it will go perfectly with what I have planned for the bedroom and only £60 bargain so fingers crossed everyone it is still there on Friday.

Next week hopefully I will be able to share a new picture with you.

Okay so targets for next week…

1) Finish the two books I am currently reading

4) post at least one book review, one poem and one flash fiction during the next week as I try to balance the blog/book scales

That should keep me busy and possibly out of trouble

Question Of The Day!⁠ ⁠ Have you ever ridden a bus in a city you do not know?⁠ ⁠ Yes, but I have to be honest I don't like it unless it is a tour bus, it is hard to sit back and relax when you have no idea where you are going or when your stop is coming up.