This week has been a mixture of something old  some thing new, and things I have been meaning to try out for a while

This week I have caught up on a few of the back catalogue of a podcast I only found towards the end of last year. My Favourite Murder is a mix of true crime and humour, not a mix you would think to put together but it works.  I love the fact that most of the crimes they cover are ones you will never have heard of and at their live shows they get the audience to contribute. They also do mini episodes reading listeners true crime experieces. Now. of course, I could just give you the link to the website but nope. I decided to share an animation one of their fans created to match one story, this perfectly explains how the humour is integrated and also why I love this podcast, because these two women could be your friends, you can easily imagine hanging our and swapping stories with them.

I haven’t listened to much music this week but what I did listen to was amazing and took me back to me teens. I saw a post this week about the film and that inspired me to hit play on the soundtrack, while I love all the songs this is one of my favourites. 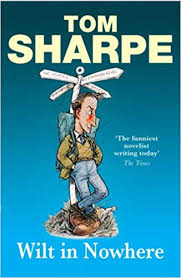 My current wip I am focusing on his quite dark themes including depression and suicide so I decided I needed something fun to read so I had a look at my book pile and spotted this old favourite. While this is the fourth book in the Wilt series I do think you can read it as a stand alone and enjoy it but you do get more from it if you have already read the other. The books are wittiy and although in some aspects they are a little dated interms of advances in modern technology they will still make you laugh out loud at the obsevational humour.

I frequently lose interest in these sort of programmes once we are through the audition stages but occasionally The Voice is one I will continue to watch. I enjoy the fact that the main thing in these blind audions is the singers ability to perform a song, yes occasionally the judges will try to guess about the singer, but many times they are deceived by age or looks. Sadly once it reaches the viewers votes then you find those who are different do fail to get through as far as they should.

This week I spotted an old favourite on Netflix that I have not watched for a while. It is interesting watching past favourites to see how they age, yes the clothes in this may be a little dated and we all know the technology would be different if this were made today but it is a faithful retelling of the book with, in my opinion, the perfect cast and pacing. The popularity of the series Hannibal is no doubt due in a large part to the charasmatic portrayal of Lecter in this and the subsquient film.

I have been trying to decide if I want to watch this for a few months, then I was struggling to find something to watch a few nights ago, now I am half way through the second series. It’s funny and in a very light hearted way challenges the conventions of good and evil, the way the books are balanced and whether philosophy has all the answers. It has an amazing cast and even though I was a little unsure about Ted Danson (I still always think of Cheers) I decided it was worth a try and I am so glad I did but I am worried that I am soon goingto run out of episodes at this rate lol.

Tickets are still available if you are in the #Peterborough area on October 6th 2019 you can get them here.

I decided to cheat and instead give you a teaser from one of the stories I am working on this week for Voices, I hope you enjoy it….(subject to editing and change before publication)

She dragged her suitcases inside, and admitted defeat immediately, no way would she get them upstairs with their contents intact. Over the course of the next few hours she traipsed up and down carrying her belongings up to the bedroom before beginning a more in depth exploration of the downstairs. Keys in hand she headed into the kitchen and found the key to unlock to back door. Once the door was opened and letting in a little more light she discovered that the cottage had far more modern conveniences than she had anticipated. Carefully hidden behind doors were fridges, freezers,a washing machine and microwave, most impressive were the radiators carefully hidden behind wooden panels, everything gave the appearance of belonging in the previous century while requiring none of the hard work. She had had the foresight to pick up the basic essentials such as bread and milk by slipping the taxi driver a few extra pounds to pause at the local shop.

The shopkeeper had been naturally curious at a new face but there had been something that passed across their face when she had mentioned why she was here. She could not exact put a name to the emotion and anyone less inclined to pay attention to the details would have missed it but she had definitely seen the shadow that had briefly flitted across the face before it was replaced with a smile and what appeared to be a heartfelt welcome to the community.

It was early when she arose the next morning,a thin shaft of intense sunlight had crept between the edges f the this curtains and bathed her face in golden light. She was amazed at how well she had slept, she had expected the thought of sleeping in a dead woman’s bed to keep her awake but whether it was the fresh country air or fatigue brought on by the days travelling she had fallen into a deep slumber almost as soon as her head had hit the pillow and for the first time since discovering the infidelity she had slept soundly and without tortuous dream plaguing her.

Could you sleep in a dead woman’s bed?

I decided to cheat a little an post an excerpt from the authors introduction, firstly it makes a few things easier to explain but also it will help you make sense of my review.

As you can see the Agatha Christie theme runs through this book not only in terms of a plot outline but also in the chapter titles each of which is an actual book title by Christie.

We start the book off from the point of view of the military unit, predominantly that of Shade initially with more characters becoming known to us as the book progresses.  They are in the middle of a war an believe they are about to take part in a training mission on an asteroid.  On their arrival they soon discover not all is as they expect it to be and they are not alone.

After a misdirected effort to reach their destination the Doctor, Polly and Ben also find themselves on the asteroid and a force field prevents the re-entering the TARDIS.

I am going to really leave the plot there as I don’t want to give away too much, those who know the Christie original will know people disappear one by one but in this case even that is not what it appears to be.

I have to confess that I am not thrilled by the companion choice for this book, of all the companions down the years these are two of the ones that I have least affection for and really cannot relate to.

My problem is they are very much of their time, the Doctor picks them up from Earth in the 1960’s and mentally they do not really change that much, for my personal taste Ben is far too patronising he references to Polly as ‘Duchess’ annoy me maybe because I used to have a dog by that name and can see similarities between the way he treats her and a pampered pooch.  Polly herself is also everything that frustrates me in many female characters, constantly requiring saving, insipid and superficial I just never feel any real depth to her character and her doe eyes at Ben make me feel a little queasy.

Sadly the Doctor himself is rather a non entity in this book, for the majority of the story he remains helpless on the periphery and only in the very last chapters does he real contribute to the story at all.

I know it sounds like I didn’t like the book very much but that is not really true, I liked the idea of it, and I like the story surrounding the space marines and the war they are fighting, but it very much felt like that was the main story and the Doctor was just squeezed in, I think the book could have been written just as well if not better without his presence at all.

If this had been a later, more physically active Doctor and more interesting companions it could have been a different story but I actually think as a first Doctor story it does not really work.

I am going to give it 4 out of 5 which may seem generous but the actual writing is good and the story is good just the Who link that fails in my eyes.