This week something a little different with some true crime… 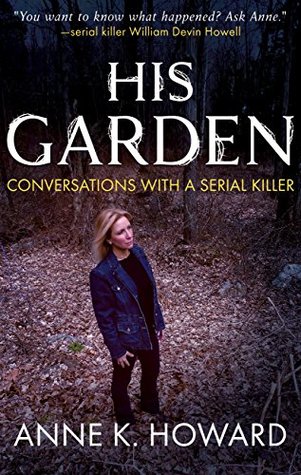 A monster was on a killing spree. In just nine months, seven people went missing; all of their bodies eventually discovered in a wooded lot behind a suburban strip mall. But the investigation that led law enforcement to their suspect, William Devin Howell, is only part of the story behind HIS GARDEN: Conversations With A Serial Killer.

A practicing attorney, author Anne K. Howard first contacted Howell while he was serving a fifteen-year sentence for the murder of one of his seven victims. He was about to be charged for the remaining six murders. A unique and disturbing friendship between the two began, comprised of written correspondence, face-to-face prison visits and recorded phone calls. Howell, who had been unwilling to speak to any members of the media, came to trust Howard.

In the years that follow, the suspect shared his troubled history with Howard but refused to discuss the charges against him, promising only to tell her everything when the case was over.

That time has come.

HIS GARDEN probes the complicated and conflicted mind of William Devin Howell–Connecticut’s most prolific serial killer. Both sacred and profane in its narrative style, the story on these pages explores the eternal question of human evil and its impact on others, including the woman he chose to hear his horrific confession.

William Devlin Howell was not a serial killer that I was acquainted with, then I heard Anne Howard on a podcast discussing her book and decided to give it a read. I am fascinated by true crime, what makes a serial killer into the monster, could things have been different, was there a different path the could have taken. this book looks at all those traditional true-crime elements as you would expect but it also gives you a very different and unique insight into the world of true crime writing.

Anne Howard talks candidly about the role of the author in these types of books, about the conflicts raised within her by the act of interacting with the serial killer and finding that it is not always that easy to reconcile the man and his actions. I think that is, of course, one of the most intriguing aspects, so many times when someone is arrested for the most horrific crimes we hear friends and neighbours speak to what a lovely man he was, how polite, how quiet, but it makes sense, the victims would be more wary of a freak, of someone outwardly strange or aggressive but the nice guy can get victims alone so much easier.

In an age where journalists are often criticised for the lengths they will go to for a story, it is nice to read about the fact that the decisions to go down certain routes, is not always as easy as it may seem, and also that while dealing with someone who saw his victims as less than human, she was able to show them as the vulnerable flawed people they were and give their families some, albeit painful, answers.

This is not an easy read, at times it does seem to drag a little however, I would say it is worth pushing through it, the book is not as sensationally told as some other true crime books but it is one of the most thought provoking I have read.

I give this book 4 out of five stars.