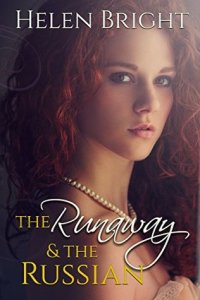 When her best friend goes missing after being targeted by child groomers, Tess Robertson feels she has no choice but to run away.

Fearing for her life, Tess leaves the children’s home where she’s resided for the past eighteen months, and boards a train bound for the capital.

While wandering the streets of London, Tess realises she’s being followed, causing her to run once again, straight into the path of a bullet meant for arms dealer, Kolya Barinov.

While Tess recovers, Kolya vows to keep her safe: to give her a good life in return for saving his.

But is this simply swapping one danger for another? Or could the path to true happiness begin with blood and bullets?

I actually thought I had already reviewed this book but apparently not so let me remedy that situation.

I love this book, first, let me set aside I know the author and hugely respect her, for both her writing and as a person, so I would never insult her by being less than honest. The characters are interesting and each individual in terms of personality and back story. The initial chapters dealing with Tess being targetted by child groomers sadly resonate all too well given I live in an area that has just seen over twenty men and two women prosecuted in very similar circumstances to that in this plot.  I would also suggest anyone wanting to learn more about the inspiration for the start of this series watch the BBC series Three Girls which is available on i-Player and Netflix.

As the story progresses you watch as Tess learns to trust and rebuild a new life despite the constant fear that her past will catch up with her.

This is the first part of a trilogy and I am not going to lie you will want the second part ready for when you finish this.

I have reread this book twice waiting for the next part, I give this a resounding 5 out of five stars.