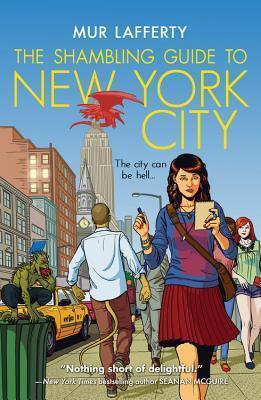 A travel writer takes a job with a shady publishing company in New York, only to find that she must write a guide to the city – for the undead!

Because of the disaster that was her last job, Zoe is searching for a fresh start as a travel book editor in the tourist-centric New York City. After stumbling across a seemingly perfect position though, Zoe is blocked at every turn because of the one thing she can’t take off her resume — human.

Not to be put off by anything — especially not her blood drinking boss or death goddess co-worker — Zoe delves deep into the monster world. But her job turns deadly when the careful balance between human and monsters starts to crumble — with Zoe right in the middle.

I love this book, it works far better in the audio book format than it did getting the episodes weekly, but this is a review so there are a couple of parts where I do feel things could have been done better.

Mur narrates her own novel, and while I like her voice, and there is certainly nothing wrong with her reading, I do in places wonder if it could have been even better with an actor reading the story, while she knows the story best an actor/narrator can often bring more in terms of diversity for various characters, though given the book is written primarily in third person this is not as big an issue as it might have been. I will say I think it would make a fabulous film or play or could even be adapted into a good full cast audio drama.

My second gripe is a small one and it is not major however it is in one way a spoiler, between the chapters you get little snippets from the guide book the fictional character is working on, however about two thirds of the way through the snippet is the dedication and actually gives away the fate of one of the characters, and while you may have an idea already that things will not end well for the character in question it is still up in the air at that point how it will end.

The story is fun and appealing, my son has heard clips from in and wants to listen to the whole thing but it is not suitable really for children as there is an encounter with an incubus which might lead to you having a few questions to answer, but once he hits his teen years I would have no problem with him listening to it. Sadly the sequel Ghost Train To New Orleans is not available via Audible UK so bear that in mind if you decide to go with the audio format, though I will say Mur has quite a distinctive voice so if you listen to the first I am sure you will hear her voice as you read the second.

So we have to go with scores and I have to penalise for the spoiler so…4.5 out of 5 stars.

Just a quick P.S since I wrote and scheduled this review I have heard news that it has been picked up by Netflix so maybe a tv version is on the way.