Vanessa Stephen was the eldest daughter of Sir Leslie Stephen and Julia Prinsep Duckworth (1846–1895) for many of us she has been overshadowed by her sister Virginia. There were also brothers Thoby (1880–1906) and Adrian (1883–1948), and half-brothers, George and Gerald Duckworth, and they grew up in Westminster, London. She was educated at home in languages, mathematics and history, and took drawing lessons, she attended Sir Arthur Cope’s art school in 1896, and then studied painting at the Royal Academy in 1901.

In later life she alleged that during her childhood she had been sexually molested by her half-brothers, George and Gerald Duckworth, though of course one can only speculate not only if this was true but if it was whether she was the only sister effected and if that had repercussions later in their lives.

After the deaths of her mother in 1895 and her father in 1904, Vanessa moved to Bloomsbury with Virginia and brothers Thoby and Adrian, where they met and began socialising with the artists, writers and intellectuals who would come to form the Bloomsbury Group.

She married Clive Bell in 1907 and they had two sons. The couple had an open marriage, both taking lovers throughout their lives. Bell had affairs with art critic Roger Fry and with the painter Duncan Grant with whom she had a daughter, Angelica in 1918, whom Clive Bell raised as his own child

Vanessa, Clive, Duncan Grant and Duncan’s lover David Garnett moved to the Sussex countryside shortly before the outbreak of the First World War, and settled at Charleston Farmhouse near Firle, East Sussex, where she and Grant painted and worked on commissions for the Omega Workshops established by Roger Fry. Her first solo exhibition was at the Omega Workshops in 1916. 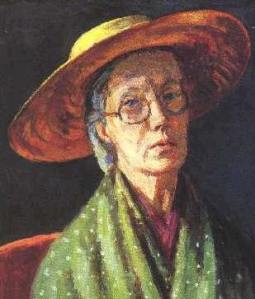 Some of Vanessa Bell’s works were related to her personal life. For example, her illustration for To the Lighthouse, the book by her sister Virginia Woolf, which was not published until 1927, is about a beach with lighthouse that was a part of Bell’s and Woolf’s childhood in St Ives, Cornwall.

I chose two paintings by her the first a self portrait, and I have to say in both this painting and the photo of her there is a definite air of melancholy. it is easy to see that this is a woman who has known pain, something which obviously ran through the family. Though the majority of her paintings are fairly abstract there are other example of still life compositions which I feel are better for demonstrating her actual artistic ability, the more avant garde painting do of course testify for her creativity.

This is one I really liked…

White Roses a simple composition however it evokes so much more, the fading blooms wilting, life cut short by the removal from their nature environment and enforced confinement in a vase and the books also trapped by the weight of the water. And of course we know water is the element that took her beloved sister from her.

Do we read too much into the words or paintings of the author or artist? Of course we do! We place our own knowledge, beliefs and theories upon what might be a very simple thing, she may have just seen the roses decided they needed raining a little to catch better light, hence the books and it might just have been a pleasant way to pass an afternoon. The thing is we are both right and both wrong, no interpretation means more than any other because we cannot know every possible meaning for everything. If Virginia had lived would Vanessa’s work have been more well known? Would Vanessa have painted herself smiling in her old age?

So many possibilities but maybe the only real truth is that beauty is in the eye of the beholder and needs no other.

This work is licensed under a Creative Commons Attribution-NonCommercial-ShareAlike 4.0 International License.
Join 3,373 other subscribers