Sometimes reading a book can break your heart… 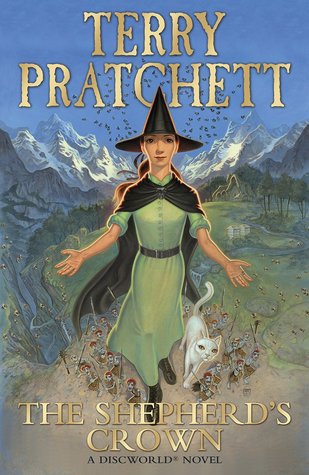 So let’s see what Goodreads says…

A shivering of worlds

Deep in the Chalk, something is stirring. The owls and the foxes can sense it, and Tiffany Aching feels it in her boots. An old enemy is gathering strength.

This is a time of endings and beginnings, old friends and new, a blurring of edges and a shifting of power. Now Tiffany stands between the light and the dark, the good and the bad.

As the fairy horde prepares for invasion, Tiffany must summon all the witches to stand with her. To protect the land. Her land.

There will be a reckoning…

March 12, 2015, a series of three tweets broke the news everyone had known was coming but no one was prepared for…

AT LAST, SIR TERRY, WE MUST WALK TOGETHER.

Terry took Death’s arm and followed him through the doors and on to the black desert under the endless night.

Like many others I know I shed a tear, some many think it strange to cry for a person you have never met, but as a writer knowing just how much of yourself you put into your creations, I like so many others felt I knew him. I know a few people who had been lucky enough to meet him in person and attested to the fact he was a warm and caring as he came across on TV interviews and other programmes he was involved with. Move on a couple of months and this book is released, the last Discworld book there will ever be, the final book in one of the greatest series ever written regardless of genre. And I am torn…

You see while I have this book sat unopened it is not over, there will always be one more book but, the minute I open it, the world, so masterfully created by Pratchett, ends.I put off reading it for that very reason, however as time has passed it was was becoming increasingly difficult to avoid spoilers, finally I decided I had to take the plunge and opened the book and within a few pages was crying once more.

The Discworld series can be broken down into sub-series such as those dealing with the witches, the wizards or other Discworld residents. This book is fitting as a final book as it  does tie a couple of these threads together but at the same time it is frustratingly tantalising in that one must now imagine the future of the Discworld as it transitions from the world of magic and beliefs in fairy folk and towards a world of science and discovery. So much potential will go uptapped, questions unanswered.  More than anything else this is a Tiffany aching book but without giving away too much of a spoiler we have to say farewell to a much loved character, a tragic foreshadowing of those final three tweets.

There is an afterword which suggests the book was not as finished as Terry would normally have demanded but it is barely evident, because of the way he wrote there are admittedly one or two places where you can speculate he would have returned and filled in more depth of detail but the story does not suffer for the fact he was denied the time to do that in this case.

As hard as it is to be constructive in this review I would say it has only one failing and that is that this is one of those books you cannot just pick up and read, well you could of course but a knowledge of the back story and the history of the characters really is needed to get the most out of it. Saying that if you have not read any of the series you are missing out, go to the first one and read them all, it can be a little hard at first, I will not lie the pace and humour  can be daunting to the uninitiated but if you have an appreciation for wit, satire, and seeing the humour in the quirks of humanity then this is the series for you.

I really don’t want to give this a mark though of course only one  is possible, a final five out of five and a sad farewell.