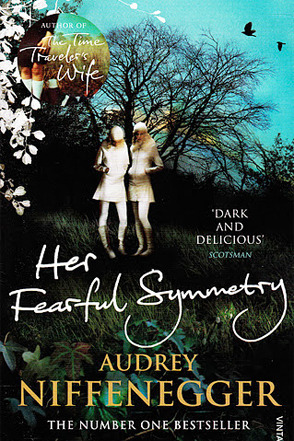 As always we start with the Goodreads Blurb…

When Elspeth Noblin dies she leaves her beautiful flat overlooking Highgate Cemetery to her twin nieces, Julia and Valentina Poole, on the condition that their mother is never allowed to cross the threshold. But until the solicitor’s letter fall through the door of their suburban American home, neither Julia nor Valentina knew their aunt existed. The Twins hope that in London their own, separate, lives can finally begin but they have no idea that they have been summoned into a tangle of fraying lives, from the obsessive-compulsive crossword setter who lives above them to their aunt’s mysterious and elusive lover, who lives below them and works in the cemetery itself.

As the twins unravel the secrets of their aunt, who doesn’t seem quite ready to leave her flat, even after death, Niffenegger weaves together a delicious and deadly ghost story about love, loss and identity.

This was one of those books that frustrates a reader for me, the first three quarters of the book is excellently crafted, building suspense and really introducing the characters to a level where they feel incredibly real, then it blows it.  The last quarter feels rushed, almost as if the writer realised the deadline was looming and wanted to tie up the loose ends, secrets that have intrigued throughout the book are explained away in a paragraph or two, and the final twists in the plot had the potential to offer so much more.

As a stand alone book I don’t think this works in the end, I would much rather have had a trilogy of books exploring the three key plot elements, say one for the relationship exploration for each pair of twins and one for the resolution than had the ending rushed the way it felt.  I was raving about this book as I read it right up to the last few chapters and I waited to reflect upon my feeling before reviewing to see if I changed my mind but sadly I did not it only added to my frustration.

The quality of writing is extremely high in general and the characterisation is brilliant, my only complaint is the timing in that final quarter.

If I had given a score at the three quarter mark it would have been a five but sadly that last quarter pulls the score down to a three and a half out of five for me.

3 thoughts on “Book Review – Her Fearful Symmetry By Audrey Niffenegger”