Today something a little different, SJ over at Delirious Anecdotes has nominated me for the Love-Hate Challenge which consists of the nominee posting three lists: ten things they love; ten things they hate; ten people they nominate for the challenge. You can check out SJ’s lists here Love-Hate.

1)  Really obvious the first one, my kids, not really much to say on that but I have been blessed with two incredible kids I know my daughter does not get mentioned as much on here as the monster but she refuses to co-operate with videos and photos lol.

2) My friends, as well as great kids I have also been so lucky as to meet and get to know some incredible people over the years, some have been in my life for a long time some I have only known a short time, some I have never met in person but our cyber interactions have meant that they have become very special to me and my family and it is only a matter of time until we meet in the flesh. This is a picture of me and my best friend taken at her wedding anniversary on last Saturday, we have been friends for around 19 years and pretty much been to hell and back together in that time. 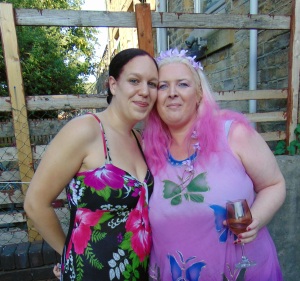 3) The Furries – obviously the dogs frequently make appearances in the vlogs but there are also the two guinea pigs, I am a huge believer that all children should be brought up with pets, it teaches them love, compassion and responsibility, I feel sadly too many people in this world lack those attributes they are brought up in houses that are not homes but showrooms designed to show off material possessions rather than to be a place that teaches the values that would make this world a better place.

4) Walking in woods – I grew up in the countryside and there is nothing as exhilarating as walking through woods and letting the minds create a million stories for every little noise, this is the monster sat at the beck at the beginning of a walk heading to the woods I spent lots of time in as a child and if anyone wants to write a story about this picture link it back to me please.

5) Books, it will not surprise anyone I love a good book but even the bad ones serve a purpose, after all how do you know what is good and what is bad if you do not experience both, TV and films may provide entertainment in a more immediate form but they will never stimulate the brain as a book can, a book makes you think for yourself, create visual images of the characters, locations and envision the action it makes you debate if they have taken the right path, should they trust that character or believe a different one.  You can read a good book a hundred times and still find something new to take from it as our understand alters over the years.

6) Music – First let me state I do not have a musical bone in my body in terms of actual playing music but I love listening to it. I love classical music that stirs the emotions, pop music that has me twirling around my room dancing and singing (though only when the music is so loud it means I cannot be heard) or even the musical scores of films that allow you to close our eyes and re-imagine your favourite scenes. Here is one to give you an idea of what I mean…

7)  Doctor Who – No surprise for you all there, but what I love about this as much as the show itself is that it is a love and passion I get to share with both my kids and in November we are going to the Excel centre in London for the Doctor Who Festival, and hopefully spending the weekend down there exploring.

8)  The sea – I grew up going on day trips to the seaside every weekend more or less, then when I was about ten my grandparents moved to the Isle of Wight and my love of the sea continued to grow, I love going out on boats and big waves no problem, the only time I ever felt sea sick was coming back from France stuck out side the harbour because of bad weather and that was because I was stuck below, unable to see the sea itself.

9) Taking photographs – this will not surprise most of you who have followed my blog for any length of time, in fact for quite a while I was posting on a separate blog sharing my photos which I really should consider staring up again.  One of the perks of my newsletter is the promise of at least one photo that is unpublished anywhere else, last month was a butterfly and though I will not post that picture here I will post one from the same shoot which is almost as good as the newsletter one.

1) Hate – yes I hate hate lol I guess really it should read intolerance because there are times where real hate is understandable, if someone has killed your loved one but to hate en masse because of colour, religion or sexuality is wrong, wrong and ignorant.  Society is becoming more accepting when it comes to colour but let’s face it that has taken a long time and is still not quite there. Religion well again if truth be told most have more in common than different and if all the religions of the world stuff to the actual words spoken by their Gods rather than the interpretations given by men telling them what God meant or what they say God told them then the world would be a better place and a lot more peaceful, but it is also up to the majority of followers of all religions to stand up and refuse to allow their religions to be hijacked by the extremists on all sides, listen to ISIS and to the Westboro Baptist Churches you will find the only difference is the way they spread their messages, the messages themselves are not very different.  The issues with sexuality are usually fuelled by religion but again it really is very very simple, if you don’t agree with a homosexual lifestyle, don’t have one! If you don’t agree with gay marriage don’t have one! Leave the judgement to which ever higher power you believe in and get on with worrying about your own life and making that the best it can be, this is my best friend and her wife at their wedding anniversary last week, they believe in marriage, I don’t but guess what I still support their choice to do it even if I don’t want to but then again maybe I should demand all marriage be banned because I don’t agree with it?

2) Waiting in for parcels – why is it if you are waiting for a parcel but also need to go somewhere it will not arrive until late afternoon but if you are planning a day at home anyway it will arrive first thing in the morning?

3) Cancer – if there were one thing I could wave a magic wand and change it this world it would be to remove this disease, I know there would still be others but the money we donate to research could be given to wipe out other illnesses but this evil seems to continue to take so many lives and it’s cruelty at letting people get better before striking them down again makes it particularly malicious.

4) Snow – now don’t get me wrong, as a kid I loved building snow men and sledging but what I hate about snow as an adult here in the UK is that everything stops with the first flurry.  Schools shut, buses stop but bosses still expect you to sort out child care and get to work.  It usually has been predicted yet the councils fail to get the roads gritted in advance and it gets very annoying and frustrating

5)  Clothes shopping – When I was thinner I loved clothes shopping I could walk into any shop and find something I like but once you are a certain size your options reduce considerably, much of the time you are reduced to one or two shops or shopping online and most of the time you will be paying more for decent clothes, yes I know there is more material involved but not as much as they charge you for.

6) Fleas – I have two dogs as you know and the battle against these evil critters is an epic one, first it costs a fortune over the year roughly £200 just on the Frontline I apply on the dogs but because we have foxes that live where we do and other mite carrying wild life there are also the sprays etc to ensure they do not carry the odd one back into the house after walks, and secondly the fact that just thinking about them has you scratching for hours even when you know there are none there. Why can they not work out a why to rid us of these creatures for once and for all, I cannot see anyone getting upset at there extinction or mounting a save the flea campaign.  Maybe if we could persuade hunters that the true symbol of their skills is a mounted flea of a board?????

7) Pets getting old – Boris is now 16 and I know his days with us are numbered and I hate it, I hate that the chances are I will be faced with the choice to make between breaking my own heart and ending his pain and it sucks.

8) Rain when you have to go to work – I love the rain when I can sit and watch it from inside or even spin round in it in my garden but I hate it when you are heading to work then have to sit their in damp clothes and wet shoes for hours.

9) When your computer decides to shut down and for some reason autosave decides to take a break and go on holiday – I know I don’t need to explain that any further to you guys.

10) When WordPress and other social media sites decide they want to change things and don’t give you the option they just change things for you and usually make things harder to use!