The first book review of 2015, the question is will we be off to a 5 star beginning… 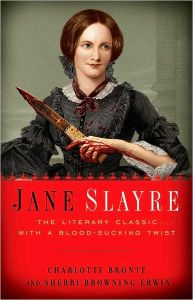 Jane Slayre is of course an adaptation of Jane Eyre, unlike fan fiction is does not contribute to the story as such rather it takes the original work and changes the genre and feel for it, hence the fact the original author remains credited.

This book brings into Jane Eyre’s world a host of supernatural beings, vampires, zombies, in the same way Jane Austen’s Pride & Prejudice was infiltrated, however it does not seem to quite have the same attraction as that adaptation had.

I think the problem comes with the actually text, if you have never read Jane Eyre then you may totally love this, however, if like me you have read the book numerous times and love it you will find yourself literally picking out huge passages which have been lifted directly from the original.  This would have worked so much better had they just written the story of a girl like Jane Eyre rather than trying to use that actual story, for me it just lacks something, and does not have quite enough originality to pull it off.

I am going to keep this review short because there is really not much to say, it is an easy read and for younger readers unfamiliar with Jane Eyre it may even be a good way to tempt them towards reading the classics but for me personally it is like a film remake, even with added special effects they never live up to the original.

I give this 3 out of 5, which seems okay until you consider without the vampires and zombies Jane Eyre is a 5 out of 5 all day long.