This Glossy box marks the third anniversary of them starting their service so as you can imagine I was rather excited to see what would be in it, the box was the trademark pale pink but new texturing makes it look a little sharper.

They have also given the info card a make over and I have to say I like this as it feels like it gives you more information for each product. 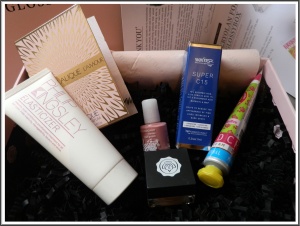 I was disappointed to see a hand cream only because I seem to have received a few different ones since I started and have even given some away to my daughter as there is only so much you can use lol but I was intrigued by some of the other products. 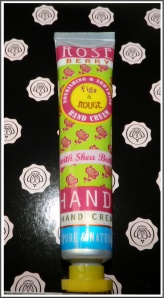 I received the Rose Berry scent, I am not sure what other ones are available but I was rather taken with this one. as it contains Shea butter it is very moisturising and rubs in well, a little going a long way. the sample I got was 20ml and the full size costs £6.95 for 80ml, I have to be honest if I could buy this in a store I would probably buy it but it is only available online as far as I can see which means paying extra for postage and unless I wanted to stock up or buy other products to make it worth while it does put me off which is a shame. 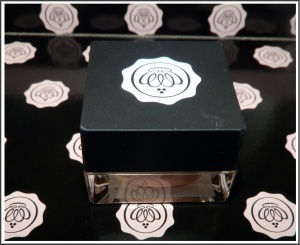 I have never really bothered with highlighters but recently after seeing lots of Make up vlogs using them I had been thinking about trying on. Previously I had received a liquid one I passed on to my daughter so I was glad to see this was a cream. 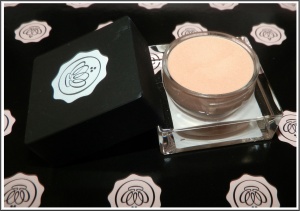 it does have a little sparkle but blends in really well so you are not left with a streak across your cheek bone or brow bone.  I actually really like this but again it is only available on line but luckily this full size 4.5g version worth £12..95 will last for a very long time so it might be worth buying again if I fail to find a shop buying alternative I like as much.

And on to the next item…

I have to admit I love these perfume samples and this was no exception, the one slight difference this month was this one was not the usual mini spray sample instead it has what reminds me of a pepper pot opening with three tiny holes and drops out…

I have to be completely honest I love this so much that despite the price tag, £67 for 50ml I really want it, I am hoping if I drop hints Santa might bring me some and failing that I shall be checking out discount perfume shops looking for it in the hope of getting it on offer. 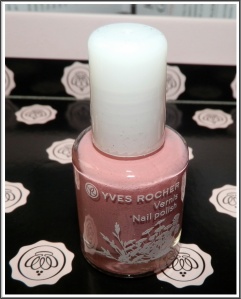 My first thought was this was a mini sample size but it is actually the full size version of just 3ml.  Because of the small size I only tried it on one finger…

this was the best I could show the colour which is a lovely dusky pink, the polish has a gel type finish and did seem to last quite well and did not chip easily.  At £3.60 for the mini bottle the price seems expensive though of course cheaper than going for your nails doing and I would take a guess it would do your nails a couple of times.  This size would be handy to take on holiday with you but it seems it has to be ordered on line so again you would have to order a couple to make it worth the postage.  I might re-buy this not sure though even though I do really like like.

The next item is….

Generally I am not a big fan of oils on my face simply because I have combination skin so while it works great on some parts it tends to make other areas oily and spotty and this was no exception.  it is not as bad as some others I have tried and for the drier areas it soaked in nicely. 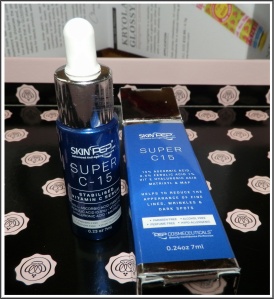 I received the full size version of 7ml worth £13.99 and as I cannot use it all over it will last longer, I am actually using it on my neck rather than my face now and am quite happy with the results I am getting doing that alongside my normal moisturiser.  The best bit about it is the dropper…

This makes it really easy to get just a couple of drops without it going everywhere, while I am not using it quite as it was ntended to be used I would actually consider buying it again if the results carry on as they are doing so far.

I am seriously conflicted on this one.  It was originally designed for Audrey Hepburn one of my idols, so that of course adds an extra dimension to wanting it, based on this 40ml tube we received that will do my hair maybe four or five times if I go easy with it (remember I have long hair at the minute) the full size tube is £38 for 250ml and while it may only work out at a couple of pounds per use it is a lot of money to shell out on one hair product when there are so many others on the market.  My hair was certainly easier to brush through after washing when I had use this but by the next wash it made very little difference, possibly it needs to be done a couple of times a week to build it up but twenty minutes wearing a towel or shower cap prior to washing the hair is not always something that can be easily fit in.  I would certainly buy it again if I could find it cheaper somewhere so it may be on the list of things to watch out for and stock up on at bargain prices.

So this month 3 products out of 6 I loved, 1 I like but am not sure I can justify the price on and 2 that underwhelmed me, overall the positives far out weigh the negatives, now to leave that card for the perfume pinned up where the other half cannot fail to notice it 😀