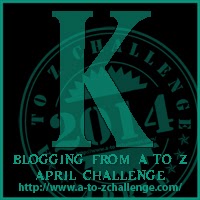 This was another letter I struggled with but I have also been a little lapse this weekend and spent rather too much time in the kitchen.

I decided on killing because as a writer there are some aspects which can be very therapeutic and for me killing people is one of them.  I don’t for one minute suggest all my writing is full of gory murders, but although not all of it reaches the page my mind can reek retribution upon those who upset me in various ways.

The poor souls who cross my path are frequently horribly maimed inside my head, a few have met gory deaths as part of the novel I have written which is waiting for another round of editing, but those deaths are of course totally fitting for the story.  I have thought about writing crime fiction as an outlet for bumping off those who have annoyed me but I have to be honest that is one genre I would much rather read than write.  For now I will consign a few to eternal life as a ghost so I can dwell on their ending but most will remain meeting gruesome ends in my head, for example my little boys dad after one row found himself taking centre stage in my dreams that night, however in them he was hung upside down impaled on some railings while I lectured him on exactly why he had ended up in that position as he bled to death only in the dream of course).

I do at times wonder what it says about my that I do dream so graphic deaths for people but that is how my mind works, what about you do you ever visualise a nasty ending for anyone who upsets you?