This is going to be quite a difficult review to write because given the book is only out in hardback at the minute the chances are there will be people out there who have not read it, but I shall do my best… 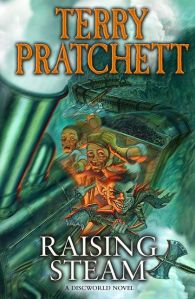 Thirty years ago Terry Pratchett created a world which would enchant readers and hold them captivated by the delightful characters they encountered there.  Raising Steam is the 40th Discworld novel and a fitting anniversary celebration of this ever evolving universe.  Readers are treated to a cast of old and new characters headed by the wonderful Moist Von Lipwig.

I love that the series remains fresh despite the fact that it has been developing for thirty years and cannot think of another series where a series has run as long while not only maintaining quality but raising the bar constantly.

In this we see more of the other creatures who also inhabit the Discworld and the struggles for equality while retaining their individual cultures in the face of an increasingly diversifying melting pot better known as Ankh Morpork.  It could be argued that this aspect is an interesting introspective into the issues surrounding multiculturalism in our own countries at the minute, and the fact most people are happy to get along with a small minority determined to cause strife and division.

This book has the central theme of technology and invention and it is interesting to consider from our won advanced technological position the impact that steam and the railway actually had all those years ago.

I don’t want to go too much further at this time as it is not yet out in paperback so there may be many out there who have not read it, if that is you then go get it I give it a resounding 5 out of 5.

On a side note if you have trouble keeping the Discworld books in order click here for assistance.