Here in the UK today is a day of Remembrance, we stop and we think about those who lost their lives fighting to give us the freedom we take for granted,  We do not think about whether the wars we just or necessary because those we honour did not make the choice of which battles were to be fought, we do not argue over the politics of those politicians who try to hijack the fallens memory for to do so would be to allow the shallow minded to taint the honour of those whose shoes they are not fit to lick.

We honour those whose determination that their children should have a better future cost them their lives, those who left home little more than children themselves and never got the chance to learn how it felt to be a parent.  We do not glory in war, rather we contemplate the fate of those who faced fear to give us the freedom to protest at injustices we see.  There are many who say they will no longer wear a poppy because of the politicians who try to manipulate the remembrance for their own causes but I will always wear mine with pride.

You see I do not wear my poppy because I should, I do not stand silently on the eleventh hour of the eleventh day of the eleventh day solely because I was brought up to as I did before I understood why we do it.  Rather for the last few years I have done it for one very special man, a man I only know had blonde hair and green eyes, a man I know nothing more of than a name, my great grandad.  He left his home when he did not have to, he was a miner he could have stayed home safe with his wife and seven children, he was of Irish descent born in England of parents who had fled here during the potato famine.  He owed nothing this country who had made his parents homeless and treated his countrymen as dirt yet he chose to fight for it.  We will never know why, was it for purely financial reasons, thinking it would be over soon and it would feed his family, did he believe it would help him gain acceptance in his adoptive land, did he just believe it was the right thing to do?  I will never know why but I will always know that without his choices, his sacrifice I would not be here today writing this.  His death changed my families history, his families future. it meant he would never see my grandad grow up, go school, get a job, get married and have a family, he never met his grandson, my dad but his sacrifice had an impact on all those things and will continue to have an impact long into the future as I teach my children to understand how we became the people we are today.

I will honour the silence today and again tomorrow, I will think not only of my ancestor but of all those whose absence changed destinies in more ways than they could have ever comprehended and I say thank you for making a difference, for the strength of their convictions that the world could be a better place, and for their bravery in facing horrors most of us will never know to make sure that we never have to.

We will not forget… 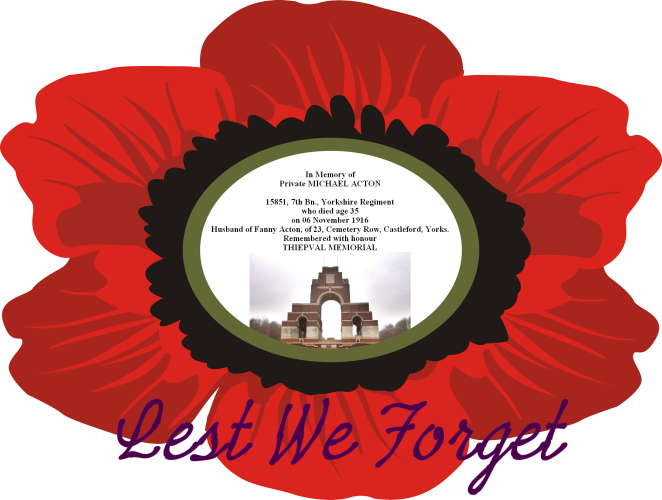 One thought on “Remembrance Sunday”

This work is licensed under a Creative Commons Attribution-NonCommercial-ShareAlike 4.0 International License.
Join 3,373 other subscribers