First apologies for the delay in posting this I started it on Sunday evening but my internet was cutting out ever few minutes so I decided to leave it till Monday to finish but since have got distracted rearranging my bedroom, sorting out my Twitter account to make it more suitable for Tweetdeck and registering to do Nano this year. But better late than never….

What I thought;  I really didn’t like this.  I have to be honest and I hated it, the dancing was probably great but I was totally distracted by the music.  They looked good, his physique doesn’t quite match Artem but its not too bad to look at and of course Ola looked stunning, but the music for me was all wrong at first I thought it was starting slowly and going to speed up but it never did it was like listening to a song on a radio when the batteries are dying.  It was a real shame because I think given different music I might have enjoyed it but I have to be honest it was spoilt for me.

What I thought;  Great music a song a really love, Iveta looked stunning and the dance was charming and reminded me of the American films from the 50’s and 60’s but there is just one thing.  I can say this because I am overweight, it is a fact that being certain shapes effects your ability to do certain things and in this dance the lifts are an important part of it which was sadly lacking.  The real sad thing is he gets each dance so well and I can’t help but think if he had been just a little slimmer that he really would be a contender for the glitterball.

What I thought; This must be the most beautiful and romantic dances when it is done well and tonight it was.  Great music choice, glamorous,elegant costumes, they looked like they had been dancing together for ever and I totally bought the performance.  Definite contender for dance of the week and costume of the week, it just looked such a natural performance as if she danced this every week.

What I thought;  After last weeks Charleston this felt like a bit of a let down which I know is probably not fair.  It was a nice samba but it seemed a little elegant for a samba for me.  I would love to have seem a little more high energy fun, it was like watching someone pretend to have fun rather than actually having fun even though I know she was.  Hopefully the next dance will suit her style a little more.

What I thought; This is a hard one to describe my feelings on because I don;t know if I am being fair but I guess it is my blog and about my feelings. First her dance training really showed here the dance itself was breathtaking the moves so well executed but and here is another big but her face spoilt it there was definitely a lot of over acting going on.  But I also get there is a real dilemma here Artem and Kara were the huge love story a few series ago and they are still a couple, for there to look like there was real chemistry between him and another soap actress would no doubt send the tabloids into a frenzy so the realistic romantic, sensual Rumba like Ben performed was not an option but this overly dramatic one would have had she left the gurning at the stage door. 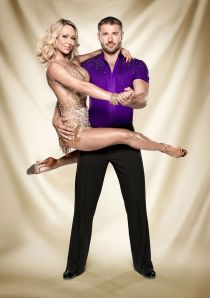 What I thought; A very steamy and sensual rumba, this is a contender for dance of the week.  The music was brilliant, the chemistry between them sizzled a little more hip action from Ben would have been nice but it is a giant leap in the right direction and if he keep improving like this he could go all the way.  It is hard for the bigger guys to move about at times but in someways this is a good Latin dance for them because it is that little bit slower, it certainly worked for Ben this week.

What I thought; It was Fiona’s birthday this week and you know what as birthday presents go dancing a Waltz with Anton is actually a damn good present.  Lovely music, smooth, elegant and charming.  Maybe lacking a little bit of magic and the connection between them is definitely friends rather than lovers which okay in real life we know is the case but for the dance it could do with the hint of a little extra but I still enjoyed it. 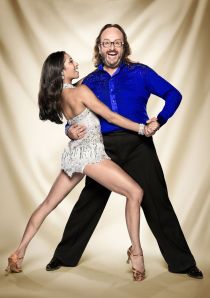 What I thought; You know I fully appreciate this is a dance contest but sometimes sheer entertainment value has to win the day. I LOVED this, the music was fantastic, and I don’t think Dave will get to the final but I hope he is here for weeks to come the enthusiasm with which he throws himself into each dance is a joy to watch and to see someone having such a laugh is contagious. 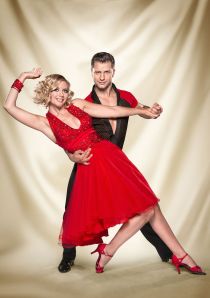 What I thought; Once again she looked fab and a great music choice, the dance was a bit of a mix.  She certainly looked and moved better than last week. Yes more improvement needed still and at times she looked a little scared but when she let go she did so much better.  I enjoyed it and think it will be interesting to see how far she can go if she keeps improving at this rate.

What I thought; I really thought this dance would have suited Julien’s energy levels sadly I was hideously mistaken.  I have to say it wasn’t all his fault I was not in love with the routine and styling but one thing that was wonderful was his smile and seeing how much he enjoyed it.  Maybe that is why they did the dance this way, they possibly realise he could be heading home and wanted to have a great time before he goes.  I love him as a personality but his days as a dancer are numbered I fear.

What I thought;  If I had to pick one of the professionals to teach me to dance it would be Robin, he manages to teach while still having fun and Deborah is certainly learning.  I loved this dance, it was fun and flighty and I have to say looking at Deborah dancing agrees with her and she is looking younger each week.  I think hers could be the journey to watch as she goes from strength to strength each week.

What I thought; They looked stunning the costumes really suited the character of the dance, so elegant and the music was perfect for the dance. Loved the start and finish at the piano and I really enjoyed it maybe not the most exciting dance and I will confess the Foxtrot is not one of my favourite dances but it was stylish, suave and I enjoyed it not much more to say. 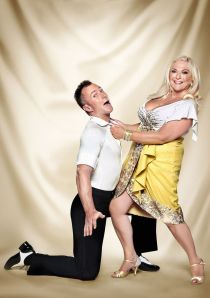 What I thought; Oh dear!  She looked much better this week the little sleeves disguised the batwings a little better but sadly the dance let her down.  The acting and character at the start was great but once into the dance this was not one that was great fro her.  I think Latin is harder for those who are not naturally gifted at dance and her only hope is to improve enough in the ballroom to keep her in but I fear she will go in the next week or two. 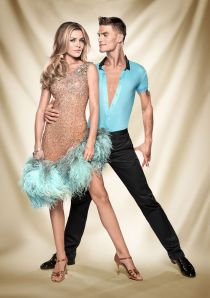 What I thought; Loved the outift and of course dancing to the Beatles how could anyone not love the music but I wasn’t overly thrilled with the dance.  It was okay there was nothing really wrong it just didn’t make me go wow.  Maybe having such long legs it takes away from the sharpness of the flicks and kicks but I think of the three dances she has performed so far for me this was the weakest.  However I think she will be safe and look forward to seeing her next week, she is actually one of my favourites.

My Dance Of The Week

Costume of the Week

I liked this outfit the only thing I might have been tempted to change would have been to either wear white knee boots or to wear Mary Jane style shoes rather than the sandals. 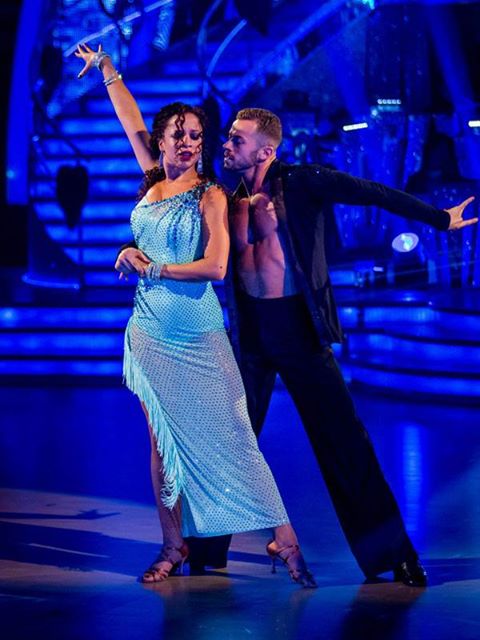 I didn’t like this dress, I know she has the figure for it and maybe if a bit more thought had gone into it it could have worked but it looks like she is wearing a school swimming costume or leotard with the top layer of Vanessa’s dress from last week shrunk onto her.  The tassels on the leg split stops randomly about 6 inches from the bottom and I just think they could have been creative and also the make up did not match her outfit, sometimes you wonder if one department talks to the other.

Julien VS Vanessa this will be a close one, Julien and Janette stayed and we say goodbye to James and Vanessa it was close one and I will be honest I expected Julien to go. 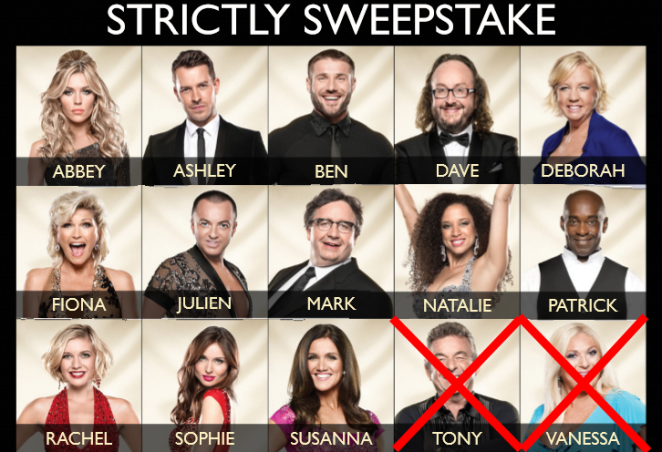