I am a little unsure how to answer this one I know a later question asks for 10 favourite characters but I suppose favourite does not always mean they would be people you would like to meet walking down a street at night.

I think I shall interpret this as characters I would like to me, date, marry or just hang out with lol

They say of Lord Byron he was bad, mad and dangerous to know and the same could be said of Captain Jack, not someone you would want to spend the rest of your life with but it would be one hell of a ride before you decided you needed stability.

A fragile immortal struggling with the contradiction between his beliefs and his gifts, though Brad Pitt did play him well it is the Louis of my imagination from reading the books I would want made real, sadly given his frailties whether anyone could change his fate would be questionable but he would vertainly be an interesting person to pass your evenings with.

3)  Aragorn from Lord of the Rings

Okay in this case I would want him to look like the film version rather than the image I had from the book but I would also want him to whisper sweet nothings in Elvish. 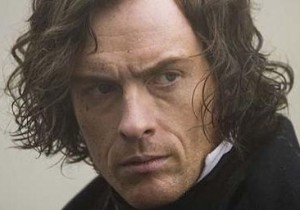 Another dark and brooding character, am not sure I would ever consider Rochester as marriage material but from a passionate affair ohhh yes.

5) And finally last but certainly not least Mr Darcy

Colin Firth so embodies this character now that when I read the book it is his face I see and his voice I hear but I think I would want the character from the book as he possibly has a little more passion than a BBC prime time adaptation could express.