Following on from last Tuesday’s post I reached a decision I will review the two books I have read together in order to give a balanced opinion I will also post evidence to back up my negativity towards one of the books as you will see that way you can decide for yourselves whether or not a poor review is justified. 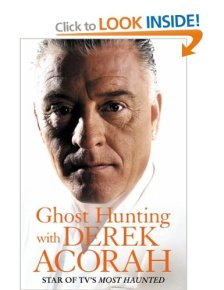 The first book I read was Ghost Hunting with Derek Acorah and I really enjoyed this one.  The book gives a general overview into Derek’s life as a medium, his work and some personal experiences.

If you are looking for in depth behind the scenes information regarding his time with Most Haunted you will be disappointed what you will get are some more personal,  less high profile experiences and a guide to what the spirit world comprises of in terms of types of haunting.  It is a really easy read and one can hear Derek’s voice as you read it guiding you through his journey.  He does however give you some interesting insights to his beliefs regarding the souls of animals and it is still a really good read.  The books does discuss briefly his early experiences with the psychic world and how he developed his abilities.

I will be honest this is more of a beach read than in depth research material, written in alight conversational style and not getting drawn in to the fine details makes it a very easu enjoyable read and I give it 4 out of 5 stars.

Now onto the second book Haunted Britain & Ireland and what a let down I had.

First I will say given that Derek was involved with a TV series with a similar name I expected the book to relate to his experiences with the locations he had visited but I was sadly very mistaken.

The first few chapters were written by Derek explaining different types of hauntings and spirits and some simple logical advice about when to visit and what to take with you but that was as far as it would seem any personal involvement ends.  The book crams in as many locations as it can possibly manage, right at the start Derek states he has not personally visited many of these locations and cannot vouch for whether they are actually haunted or not only repeat stories that have been told.  There are plenty of books around which do this already and I was annoyed that a medium with as much influence as Derek Acorah would add his name to one that did not actually contain locations he himself had visited or could give any personal experience of but it was actually worse than that.  Many of the entries were not only extremely brief almost to the point where ghosts were hardly mentioned but it was almost like a glorified business promotional book., with many being restaurants, hotels and tourist locations, just to show what I mean this was a typical entry.

If it were just the details of how to find each place or their address fair enough but it actually reads as an ad for the place.  I cannot say if Derek Acorah is responsible for the whole book or just gave his name to someone elses blatent commercialism but either way it has left a sour note taste in my mouth especially given it has a £7.99 price tag which could have been significantly reduced if these ‘ads’ were financially motivated.

I give this one 1 out of 5 and that is for the introductory chapters.

Was I justified in giving this a harsh review? You decide…