As you all know Tuesdays tend to be a little bit of a mish mash of subjects and I am throwing another into the mix.  This is not going to be exactly a review series more an examination of what I have enjoyed and why.  And I will warn anyone reading this now it will contain spoilers so if you have not watched the episode yet go away now…

I absolutely loved this episode and there is so much I want to discuss not just from the Sci-fi fan point of view but also taking the historical, literary and cultural references into account as well.

in the past.  Saltaire was founded in 1851 by Sir Titus Salt.

Salt built neat stone houses for his workers  wash-houses with tap water, bath-houses, a hospital and an institute for recreation and education, with a library, a reading room, a concert hall, billiard room, science laboratory and a gymnasium. The village had a school for the children of the workers, almshouses, allotments, a park and a boathouse. Because of this combination of houses, employment and social services the original town is often seen as an important development in the history of 19th century urban planning

A similar project had been started a few years earlier by Edward Akroyd at Copley, also in West Yorkshire. These sites were desirable as places to live, the mills were no better or worse in themselves compared to others but the accompanying housing certainly would have led to the queues we see in the episode as people applied for work in this 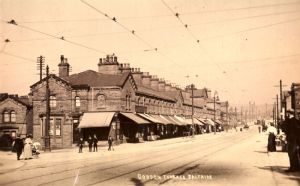 seeming Utopia.  However in many ways these new estates acted in the same way that the automation of the Daleks or Cybermen works which is to drain people of their individuality, to form if you like a collective hive, each person lives in an identical box, goes to the same places to work, to socialise and by virtue of the nature of the society they become cut off from the surrounding areas living in isolation and therefore easier to manipulate.

Throughout this episode there is a mixture of mirth and the macabre which sums up the Victorian period rather well. 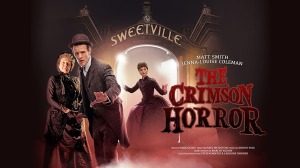 First let me deal with the humour provided by the comic legend that is Strax.  I love this combination of Madame Vastra, Jenny and Strax and although accepting Madame Vastra could move around freely in Victorian London let alone in the north does push belief to its limits however I would point out that the society of the time was fascinated by ‘freaks’.  This is the time when John Merrick the ‘Elephant Man’ was touring the country, it is a sad and telling indictment of Victorian society that Merrick realised his only way to escape the workhouse was to cash in on his disability with one of the travelling shows though due to his trust in those around him he was robbed by his manager.  For those unaware of these characters this clip will give you an idea.

The idea of Madame Vastra as the detective is what initiates the the story here when the popular belief of the last vision of the dead being retained on the retina is used as a plot device to introduce the Doctors whereabouts.  It is also reflective of the time that when Jenny sets off to infiltrate Sweetville the women appear to out number the men, this is reminiscent of the Temperance League where women abused at the hands of their drunken husbands blamed the alcohol and lack of religion in the mens lives rather than the men themselves for their actions.  It is worth noting that Mrs Gillyflower blames a drunken husband for her daughters blindness which as will be seen later is a blatant lie. 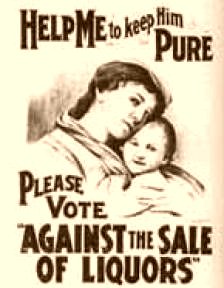 Jenny suceeds in getting into Sweetville and rescuing the Doctor, this bit was rather annoying his levels off stiffness change there is no explanation for what the cupboard is that can suddenly heal him, then he kisses Jenny.  The only redeeming feature for that action is the slap she gives him, she is after all the wife of Madame Vastra and his taking liberties like that was not really in character for the Doctor, and was a bit I would rather they had left out.

Back to the episode queue flash back sequence, I get they are trying to do something different and had talking films been around then it would have worked as it was it didn’t quite fit maybe had it been done silently with text cards but that would not have conveyed enough information, I think possibly it would have fit better if the flash back had been shown in the same format as the rest of the programme.

It is fascinating the credit Mrs Gillyflower with a profession of her own given that both science and industry were very much male orientated spheres.

Now onto the accents Clara manages a passable Yorkshire accent but Matt Smiths is more a cartoon Yorkshireman, the flash back does bring us neatly up to speed in the story explaining the Doctors image in the eye.

The interchange between Jenny and the Doctor regarding Clara is interesting in that when challenged that Clara is dead he neither confirms nor denies it, its complicated is a cheats way of the Doctor admitting he is still clueless when it comes to Clara.

The Victorians were fascinated with horror, Mary Shelley’s Frankenstein can be referenced within the episode if you consider the daughters naming of the Doctor as the monster, Shelley’s monster also found friendship from a blind person, though it is also arguable that the daughter is Shelley’s monster created by the experiments of the parent then abandoned and finally vengeful. The printing press and increased literacy made it easier for the populace to experience the written word in the form of the Penny Dreadful. 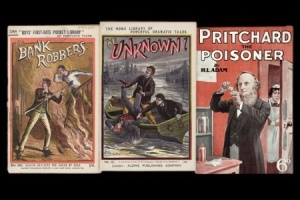 Even the title of the episode is something which would have fitted well upon the cover of one of these pamphlets, cheap to buy and easy to read they were sensationalist stories, filled with monsters and madmen.  Does that sound familiar?

Given the similarities it was only a matter of time before the show paid tribute to this genre and I would love to see a Jenny, Vastra and Strax spin off continue in that direction.

Enough of that still so much I want to discuss and this post is getting longer and longer, Mr Sweet the parasitic creature living on her chest in an obscene parody of the mother suckling her child, it could be viewed as a damnation for all those mothers who choose a man over their child. This also again harks back to the Shelley connection with the parents rejection of their creation .

ust another quick point on the macabre of Victorian society the fascination with taxidermy.  Almost every home or at least any that were affluent enough to afford them would have bell jars or cloches filled with stuffed birds or other animals.  In this episode during the flash back scene we see a couple posed at a table beneath a cloche with air being pumped into them, this tableau of normality disguising the horrors of their true existence as the puppets of Sweet and Gillyflower.  This reminded me of some rather more macabre examples of Victorian taxidermy, where small rodents are used to recreate scenes from everyday life.  In this first picture you have squirrels playing cards.

But in others small animals such as cats are used and these were fairly popular both as side shows and exhibits as well as in private collections owned by the rich.

The fact that these people have been treated (the process which leaves the failures dead, stiff and bright red.) then arranged in a parody of daily life resonates in another way at the end of the episode when Clara is outted by the children in her charge.  She is caught out by being spotted in the posed photographs from the previous episodes, Cold War and Hide, there is also a photograph of the ‘other’ Victorian Clara.

There is so much more that I could explore here, the Strax/Thomas Thomas joke, the relationship between Jenny and Vastra, the avengers links with Jenny’s bustled catsuit and the presence of Dame Diana Rigg as Gillyflower and the Doctors phallic screwdriver joke.

Overall this is possible my favourite episode of the Matt Smith era.  The is so much to take in and consider and that is before even starting to look for arc threads regarding the Clara storyline. I love the mix of light and dark, I love that the have delved so deeply into the psyche and culture of the Victorian Era.

Marks out of 5 has to be 7 would have been 8 if the Doctor hadn’t kissed Jenny.  Right am going before I think of even more to write about.

12 thoughts on “Doctor Who and The Crimson Horror”